There is a lot to talk about right now in the European Parliament: Security, migration and asylum, Turkey and Brexit. Yesterday I spoke in Strasbourg to the assembled MEP’s. I emphasised once again the need for the EU to get the basics right.

You can see my full speech below.

This agenda for this summit highlights the big challenges ahead.

As well as Brexit negotiations.

These are topics we have discussed before

Yet we all have to ask ourselves if we are any nearer to solutions.

But first, allow me start with Brexit in the aftermath of the British General Election

An election in which the Conservative Party lost seats,

but not enough to lose power,

And where the opposition gained seats

but not enough to gain power.

Ending up 56 seats behind.

And just as in say the Netherlands or in other countries, the largest party will seek to form a government with support from a smaller party.

Just as in this parliament, the largest party will need to build wider coalitions to pass legislation.

And if this means addressing concerns over civil liberties while debating new laws to tackle terrorism, in the aftermath of the recent attacks,

To my mind that is not necessarily a bad thing.

Can I take this opportunity to thank colleagues from across the political spectrum for their messages of condolences and solidarity in the aftermath of the terrorist attacks in Manchester and my home city of London.

I hope the Council will understand the importance of tackling terrorism at different levels:

At the international level, military cooperation without undermining NATO, better data sharing between national law enforcement agencies, and making sure shared intelligence is acted upon.

At the national level, upholding the rule of law, our shared values and security of our citizens; and at a local community level, encouraging local projects to tackle radicalisation at its roots.

But security is just one of the issues facing us:

The migration crisis continues, as does the EU-Turkey deal,

The ECR believes that the EU should focus on a new relationship,

based not on the false promise of future membership

but an honest relationship based on cooperation

While the deal with Turkey appears to be holding for now,

the Council must seek consensus from ALL member states to effectively tackle the migrant crisis, in case the agreement breaks down,

By getting the basics right,

Returning those that do not qualify to their country of origin,

Agreeing clear and simple criteria for qualification based on the Geneva convention,

And by NOT continuing to pursue a struggling relocation scheme without the FULL support of ALL Member States.

Our discussions on the challenges will continue way beyond this summit and future ones,

But, how many times do we have to discuss them, before our voters see real progress

While others will call for new rules

The ECR Group calls for countries to respect existing rules

While others will call for more agencies

While others will call for further political integration

For a reformed EU which does less but does it better. 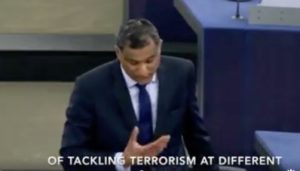