Bitcoin – What are the issues we must consider? Looking back at EU Blockchain Expo

This week I have been hosting an event in Brussels on Bitcoin and Blockchain. What are they? Well they are two different things which could transform the way we not only make payments for things but also track money or processess in a highly secure way. That is the promise, so how do we make sure these technologies benefit all of us and what sort of rules might be needed?

In the videos below I take you behind the scenes at EU Blockchain Expo 2016, organised by the Cobden Centre in association with EDCAB to find out more about the technology and discuss some of the potential pitfalls.

Below these videos you will also find my opening address to the event in which I raise various issues which MEP’s need to think about as this technology moves forward. 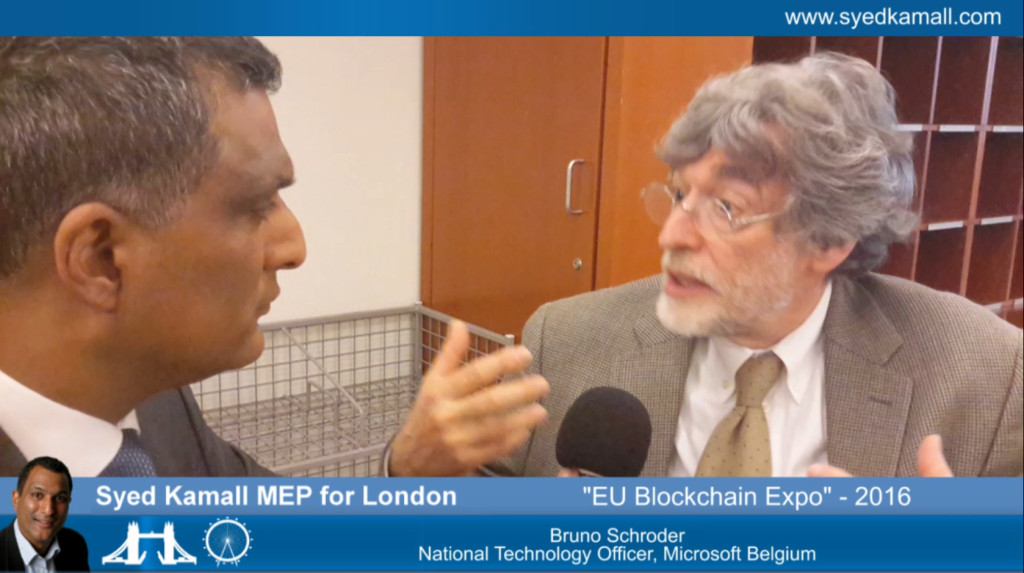 Good morning and welcome to the EU blockchain expo.

My name is Syed Kamall, MEP for London and leader of the ECR group, The third largest of eight groups in the European Parliament.

I would like to thank the Cobden Centre and EDCAB for organising this event and bringing together some of the top names involved in this sector here in Brussels today.

This event is a chance for all of us, experts, regulators, industry and policymakers to look at the opportunities offered by blockchain and virtual currencies but also to ask some of the questions that must be asked. What is block chain? Why use it? How do we ensure it is safe or reliable? Should governments invest in it ? Should we regulate it and if so, how?

Over the next few hours, I think we are going to have some interesting debates on many of these points.

If we get it right, blockchain and virtual currency technologies offer us many opportunities, not just for institutions but also for individuals which is why we need to make sure that they are part of this debate.

I consider myself a passionate technologist but even to me Blockchain can be baffling at times. I know there are many experts in this room today but I hope that our conclusions today will reach a much wider audience, so for the sake of those of you who are less familiar with it, let me do my best to explain

Bitcoin is one virtual currency that many people have heard of, in many ways no different to any other currency like the Euro or the pound apart from in one crucial way – there is no central bank and no regulation. Money is created by so called miners. These are computer systems which crack complex codes to create new bitcoins. Just like any other currency, some companies will accept bitcoin as payment for items. You can transfer bitcoin into existing currencies just the same as any other foreign exchange. There are even bitcoin ATM’s.

Underpinning all this is blockchain, the technology on which virtual currencies are built. If you want a currency with no one policing it, then you need to build a system which is incredibly reliable and robust. Blockchain offers that promise and in many ways it is blockchain that I suspect many of you here today are interested in.

Advocates of blockchain, like many of us here today, are attracted by it’s apparent potential as a system which could provide an efficient, highly reliable, incorruptible ledger of not just money but also items. For example, you could track diamonds with it to ensure your diamond stock was never mixed with blood diamonds in their route from the ground to the jewellery shop.

Every time a transaction takes place whether it is money or goods, blockchain adds a new “block” to the “chain”. This chain is copied and shared between all the users of the currency or system, meaning that if anyone wanted to alter the list they would have to alter every single list in existence.

So Blockchain is in theory,  a secure system for storing transactions or processes which is very hard to corrupt or commit fraud on.

When so much of trade is based on trust, what new business models or possibilities would emerge if people in future could trust their supply chain, where excuses would no longer work as the evidence would be clear on what had happened. Equally using blockchain technology, what possibilities are there for financial institutions to keep clear, potentially incorruptible ledges of all the transactions being made. Could this actually increase trust in financial institutions?

But virtual currencies and blockchain also raise questions that we in this Parliament have already begun to consider.

When law enforcement agencies want to check financial records of an individual they can relatively easily but with virtual currencies it is much harder. Transactions are recorded but only under a psuedo name. While it is not impossible to break that path, following the path of a criminal using a virtual currency is therefore much more time consuming. So with virtual currencies like Bitcoin, there is no verification. No one checks who is making a transaction to see if they are carrying out criminal activities.

There is no doubt that virtual currencies has been used by criminals and we must work on ways to improve accountability. Indeed one company wrote to tell me it was offering a virtual currency where all individuals are being vetted in advance.

I want to hear more ideas today on if and how we should to do this?

There is another question and that is of control.

The originators of Bitcoin wanted a currency that was outside of any government’s influence. Some libertarians see it as perfect example of a free market, while some on the left see it as an opportunity to wrest control from central banks influenced by large commercial banks.

But bitcoin has fluctuated wildly in value with changes that could send some countries crumbling!!

Again some have suggested matching virtual currencies with a standard, such as with gold to ensure some degree of stability.

Some argue that we shouldn’t and we should leave it to the market.

So, should there be any government regulation and if so, would it be to only protect citizens from the excesses of currency markets or should it do more?

We must also make sure that people who are buying and selling goods are also paying the tax they owe.

I am sure again we will discuss all of these points today.

There is no doubt in my mind that blockchain technology in particular offers huge opportunities. It is still really in it’s early days and like all innovation there will be things we must consider as we move forward, but the ability to reliably follow a path of transactions, of any sort, with little fear of fraud, is tremendously exciting and could see new markets and opportunities open up.

So lets get it right. I love innovation, I love that individuals not a government came up with the concept of a virtual currency and blockchain on their own and made it happen. We need more people with ideas like these.

What we must do now, in this room today, is discuss how to make sure everyone can benefit from this innovation. To do that we must discuss and debate these questions.

Blockchain and virtual currencies offer so much potential, so lets ensure everyone benefits in a way that is safe and reliable for all.

I look forward to hearing the discussions.