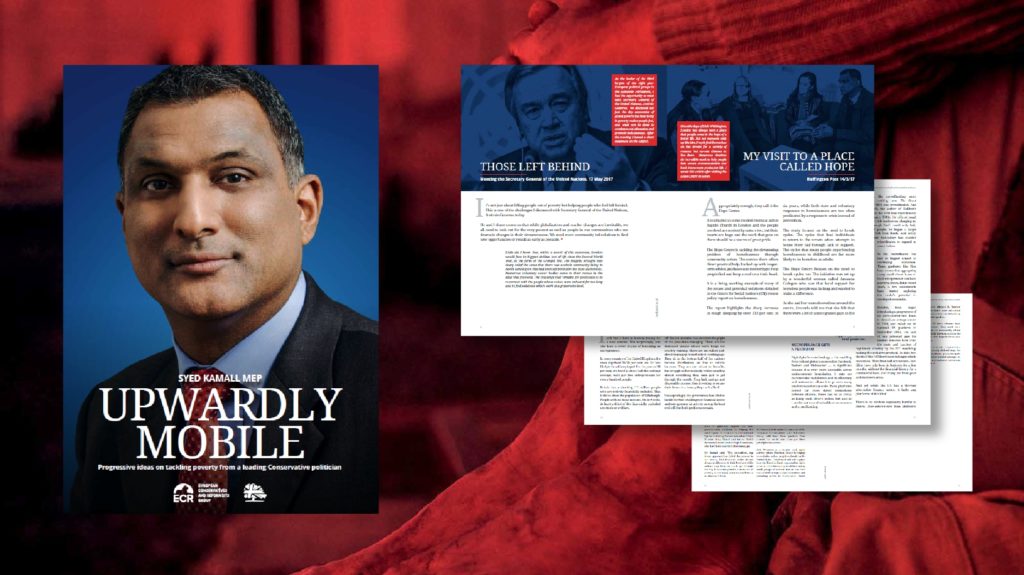 To read the full report, SK-UpwardlyMobile-preview(low-res)

I was raised in London at a time of socialism. The Labour Party seemed back then to be sympathetic to the challenges faced by immigrant families such as mine, but I came to realise that Labour politicians took the support of people like us for granted: their political advantage lay in keeping British society divided along class or racial lines.

My parents used to tell me that there was no limit to what you can achieve if you believe in yourself, believe in God and work hard.

So, I was drawn to the idea that people of any background could be upwardly mobile and make a success of themselves if they worked hard. It was this progressive politics which drove my decision, in my early twenties, to join the Conservative Party led by Margaret Thatcher, the daughter of a grocer.

Education and hard work are the means by which people achieve their ambitions.

Some of the best education in Britain today is provided by independent institutions.

Like all these necessities, education is too important to be left in the hands of the state.

Education is not an easy art, and it is certainly not an exact science. You cannot have a onesize-fits-all education for different people, from different backgrounds, with different aptitudes and
different ambitions. People’s individual needs and aptitudes can be best met and nurtured by multiple service providers offering choice. Perhaps that is why some of the most effective work that I see in education (and in fighting poverty) is often done by people and charities which do not rely on the patronage of the state for their survival.

Many social enterprises are tackling social ills today more or just as effectively as the state, because the people running such enterprises are free to let their creativity and ingenuity flourish. The Big Society was an idea that many commentators found baffling at the time that it was first suggested by David Cameron. But he was right to challenge their fundamental suppositions about the role of the state.

Londoners are better off in almost every way compared to the London of my childhood. Yet, forty years on, the ghost of socialism chillingly pervades a Labour Party which is once again falling back on identity politics and envy to try to divide and rule the country.