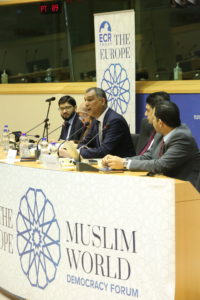 no inherent contradiction between Islam and democracy, London MEP Syed Kamall told a conference at the European Parliament in Brussels today.

Dr Kamall pointed out that democratic elections and peaceful transfers of power had taken place in Muslim-majority countries including Algeria, Indonesia, Malaysia, the Maldives, Pakistan, Tunisia and Morocco.

The Europe-Muslim World Democratic Forum, was organised by the European Conservatives and Reformists, the group Dr Kamall co-leads.

Opening the forum as host, he said: “As the leader of one of the largest political groups in the European Parliament and as a Muslim, I see no inherent contradictions between Islam and liberal democracy, but is this a Western or Euro-centric view?

“There are elements which criticise democracy as being anti-Islam and those of us who are Muslim have faced criticism for taking part in elections. Many Middle Eastern governments say that as long as they provide wealth, jobs and food, people don’t care about elections.

“In other countries where democracy has been tri 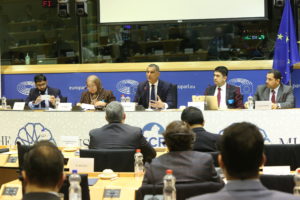 ed, some people bemoan what they see as weak government, preferring to look for strong leaders. How do we encourage these countries onto the path to liberal democracy?”

The forum brought together politicians, academics and community leaders from across the Muslim world to discuss issues such as improving social integration, the role of education and religion in promoting democracy and the future relationship between Europe and Muslim democracies. EU Security Commissioner Sir Julian King delivered a keynote speech.

Dr Kamall intends that the event should be the starting point for an ongoing dialogue.

He said: “This is just the first initiative and I hope the forum will become a gathering or network in its own right that is able to foster democracy in the Muslim world.”